The PGL Major Antwerp had us glued to the screens for over 12 hours on Monday - the Recap by GG.BET explains what went down.

The incredible amount of action that happened on the next-to-last day of the Legends Stage adds up for a packed episode of the PGL Major Antwerp Recap by GG.BET, which is presented by the expert host Jason "⁠moses⁠" O'Toole. Even without closing your eyes, it was difficult to follow all of the action

The elimination games started with Vitality's thriller against BIG, which they edged out by the smallest of margins as Mathieu "⁠ZywOo⁠" Herbaut put in a master class to keep his team afloat. G2 then ousted Outsiders in an exciting series that showed the peaks and valleys the international team can offer, while the final game between Imperial and Cloud9 can hardly be explained: watch the recap, or better yet the VOD to witness a match that will be talked about for some time.

On the other hand, FaZe fought off a resilient Copenhagen Flames to ensure a place where everyone expects them to be, the playoffs, and they will be joined there by NIP following an unexpectedly clean victory over FURIA. Finally, Marco "⁠Snappi⁠" Pfeiffer took down his countrymen from Heroic to make it to the arena, where a few of his teammates will play for the first time. 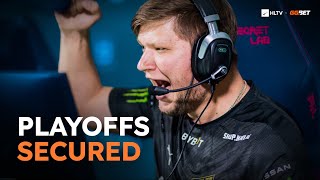 litranslation
pussy got to his head and he started spoiling his girl with a bunch of shit including a whole car. he even moved to sweden for her (and NIP, but I think its a byproduct of #1). then she left him and now he's being a little sad boy who has been out for 7 months yoinking all of NIP's money. now he's stuck in sweden with no girlfriend and he doesn't want to play for NIP anymore cause he wants to be on astralis. dudes gotta get over this shit and stop being a stubborn paycheck stealer
2022-05-18 00:01
1 reply
#22

Derzaum
wooow... I had no idea. Thought he had burnout, anxiety or stuff like that. Hard to believe a superstar on his prime got fucked by a girl that hard. Sad story. I respect people with mental health issues as i, myself, am running thru depression, anxiety disorder and phobia of swallowing (phagophobia). Well, grill certainly packed a punch, sad
2022-05-18 01:17
Login or register to add your comment to the discussion.