The player association announced that the official tournament break in the summer will run from June 12-July 9 in 2023.

The Counter-Strike Professional Players' Association (CSPPA) has announced its decision to move the official summer tournament break so that it takes place a little over a month earlier than in previous years.

The body shared that it had reached the decision after consulting the matter with tournament organizers, revealing that the change was made in order to split the year into two more even seasons. Aimed at giving top-tier players the chance to recharge batteries between the first and second part of the season without the pressures of having top-tier events held in that time, the official summer break has been in place since 2017. It was originally set for August before it was moved to take place from mid-July to mid-August in the past few years.

With the winter off-season typically set for around mid-December to mid-January, as the breaks stood they had split the seasons unevenly, with the first part lasting around six months and the second around four months. Following the changes, the split is expected to be closer to five months each.

It is unclear whether and how Valve will react to the news given that the developers have set 2023's Major windows to late May and early November, which means the first Major of 2023 would end around two weeks before the new tournament break. CSPPA has noted that it will engage in dialogue with Valve and other stakeholders to "better align with the CS:GO Majors."

imixiu
They got holiday every month, usually from tournament to tournament it lasts from a few weeks to month, average they have 2 weeks free every fckin month. break for what?
2022-07-01 17:36
23 replies
#24

imixiu
Not all. Just look on Astralis, only blamef try hardin every fckin day, most of them just spend their time with family and practice from time to time 2-4 hours a day, its really small amount of practice.
2022-07-01 17:49
13 replies
#40

ClientBillable
The amount of money I get paid does not impact the amount of time I can practice effectively. I cannot concentrate for 10 hours a day. If you can then you are a machine.
2022-07-01 19:14
9 replies
#70
dupreeh |

imixiu
Wtf u talkin about man? What about ppl who workin everyday for 8-12 hours? Man, if they are practice 2-4 hours a day only, then its break for them everyday. Come on man, look on blamef, he spent 150 hours in 2 weeks, and he showin it every time on server, when konfig sharin stories with beer on instagram and then we see how bad he is.
2022-07-01 20:21
8 replies
#72

ClientBillable
You think people who work that long concentrate for the whole thing? The pros don't just sit down and do nothing for the rest of the day. How dare Konfig have a beer!!! He should be a robot and only play counterstrike!!!!!!
2022-07-01 20:38
7 replies
#74
dupreeh |

imixiu
No man, no. U dont understand something. I gave example but i saw much more stories like that from him and then we can see on server that he prefer fun in real life than train hard for his teammates.
2022-07-01 20:43
#75
dupreeh |

imixiu
In real life u also work hard every 5-6 days a week, its life, but i gave only example, i saw a lot of players who spent only 20 hours in 2 weeks xD its omegalul, and they beed break? from what? They are not able even practice/dm in cs through 8 hours like normal average people who work for much less money.
2022-07-01 20:46
5 replies
#76

imixiu
Man, you, i, other people, going to work, one is working in corpo, one is buildin houses, they can play 4 hours morning routine and then 4 hours evening ( fpl pugs, dms ) They got paid a lot of money for that, so come on, 8 hours is not big amount of time, especially if u look on point that they are playin in cs go maybe 10 years and then they got chill life if they are clever and invest money. A lot of them can even play 5 hours, its ridiclous, but then we can see bad results.
2022-07-01 21:29
3 replies
#79

imixiu
You no, me not also cause i stopped playin video games, already only watch, a few years ago i was able to play 10 hours easily, difference is that they got money, its their job, they are force to play, cause they chosen esport in their life and its their job like all others.
2022-07-01 21:51
1 reply
#82

Peanspey
good thing that you now about the work ethic of pro csgo players. World's laziest pro esport and sport players. At least dota and lol players have to calculate constant nerfs and find new shit to abuse every few days or so. Why do you think that the worlds NR 1 team rn is so inconsistent despite their great salaries.
2022-07-01 17:40
1 reply
#67

imixiu
of course man, i follow a lot of players on ig and i know when they havin fun through whole day or even week on trip with wife/girl. I dont attack these people but come on, they have really more time for family than average people who work hard everyday through half a day.
2022-07-01 20:24
#81

QuietDon
CSPPA, like most unions, only care about their own. It is a joke, especially when they say the want the best for ALL players. Anyone involved in this garbage has me rooting against them. That being said, I am not sure that this makes any real difference. If it makes it a more even season(s), than sure. But it will undoubtedly be a reason for the CSPPA to say "look what we accomplished!".
2022-07-01 19:28
#69

DoomTurtle
why not have the major as the last tourny each season? then the seasons ends with a bang, and teams have a month to make roster changes before everything starts again. like eu football.
2022-07-01 20:02
1 reply
#89 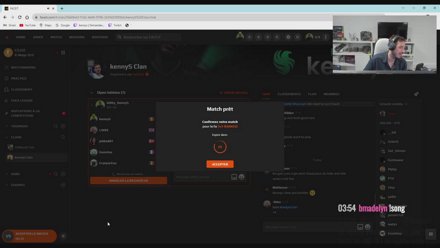