Into the Breach announce draken and RuStY signings

The British core will now be partnered with an experienced Swedish duo.

Into the Breach have officially secured the signatures of William "⁠draken⁠" Sundin and Alfred "⁠RuStY⁠" Karlsson to complete their roster ahead of the new season. The new pair will permanently fill the hole left by the departures of Kirk "⁠Tadpole⁠" Stephens and Yaroslav "⁠isk⁠" Issakov in March and put an end to the instability which forced the squad to employ several stand-ins since.

The team temporarily hosted players such as Thomas "⁠Thomas⁠" Utting and Volodymyr "⁠Woro2k⁠" Veletniuk, while Owen "⁠smooya⁠" Butterfield was signed on a trial basis in March. The arrival of the Swedes consequently means that the 22-year-old sniper will not be part of the squad's long-term aims.

The new lineup already took part in a few official matches together, most notably at ESEA Summer 2022 Cash Cup 2 Europe, where the squad managed to grab first place. draken has officially joined Into the Breach

draken needs no introduction. The 26-year-old is an explosive but notoriously inconsistent AWPer that made his name in 2017-2018 during his stints with Ninjas in Pyjamas and fnatic, Sweden's biggest teams. Following his departure from the squad in black and orange, draken spent the following two years bouncing around different Swedish teams before making the temporary switch to VALORANT.

Meanwhile, RuStY has mostly competed in the lower tiers of Swedish Counter-Strike, representing GamerLegion for nearly three years, and even teaming up with draken between 2019-2020. Read more
draken: "If I would have stayed in CS, I would maybe be on the same ego trip that I was on"

"Everyone within the squad is highly motivated to break ground and prove once again that the Swedish + UK combo is an excellent one," read the statement from Sam Macedonio, owner of the organization. "We’ll be throwing our full weight and support behind these guys and have full confidence they’ll do great things in the future," it continued.

"We are happy to have a stable team again. With the many tournaments ahead of us, our goal is to slowly but surely improve steadily and move higher in the rankings," added Marvin Matthes, Into the Breach's team manager.

The new lineup will have its LAN debut at Assembly Summer 2022 in Finland and will see Into the Breach battle it out against seven other teams for the lion's share of a €15,000 prize pool.

Into the Breach are now: Age:
19
Team:
Into the BreachC eazen
Yea kid, stop crying, and also stop projecting your insecurities and nonsense onto others. #18 otherwise. And who said I dislike Valorant? Hahahaha so dumb
2022-07-23 18:18
9 replies
#30
ZywOo |

eazen
Yea that’s you, as per usual most people are just projecting while I just pointed out a literal inconsistency. Nobody says “VALORANT” to Valorant aside from Riot gaming and the one instructed by them. You have no clue
2022-07-23 18:35
5 replies
#60
ZywOo |

_anarchy_
It is easier to type in non caps, that is why people call it Valorant/valorant/valo not VALORANT. It's Riot's game and they named it VALORANT, who are you to judge or decide what the game should be called lmao. In my opinion, Valorant and VALORANT both are the right way to write it, shouldn't be a big deal.
2022-07-24 12:33
2 replies
#123

eazen
And you can’t read just some other wannabes here who think they can discuss shit with me. First of all my complaint goes to author not to you wannabes. Secondly, again, for the third time, learn to read perhaps, Counter Strike is also written like ALL other games in bold letters, so why isn’t it written in bold letters here? Ah interesting, we have different standards here it seems. The discussion is over and I’m right, just go and talk to someone else, you can’t push your ego here. COUNTER-STRIKE -> Counter-Strike VALORANT -> VALORANT It’s just marketing. Why does the author feel the urge to do marketing for Valorant here? Nobody writes it like that aside from product pages. Edit: who am I? Apparently someone, cause you’re just jealous, and also where did I discuss what it should be called? It’s just about the weird way he is writing it. Lol, go back to school, dude. Flag checks out, a Indian being jealous. XD so not surprising.
2022-07-24 17:22
1 reply
#134
rain |

LoOuU2
thats sad , i remember there were a string of events a couple of months back when Savage were doing pretty good . Lost some final to HEET in a big event qualifier or something.
2022-07-23 18:17
6 replies
#26

anewborncsgowatcher
Time to watch Into the Breach accomplish absolutely nothing and be sent into the bench like usual.
2022-07-23 18:41
#52

mavericko19
thats a great upgrade i understand that with -rusty and the -zero announced not that long ago in GamerLegion someone will replace them or they disband?
2022-07-23 18:43
1 reply
#58

ILOVEFEET
Imagine kicking the two best talents to ever hail from UK in Smooya and Thomas for THIS LMAOOOOOOOO
2022-07-23 18:58
2 replies
#62
Martinez |

Carnage420
F for Smooya he even gets kicked off this shit tier 2-3 team like wtf he is meant to play tier 1 what in the world is going on anymore lol. i really hope he can somehow find a good new team that he fits well with.
2022-07-28 04:08
Login or register to add your comment to the discussion. 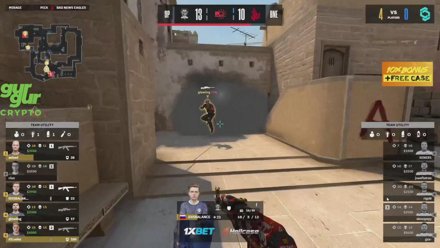