arT on not claiming the Legends spot: "I am just happy that I made it through"

The first Brazilian team secured their attendance at the IEM Rio 2022.

FURIA became the fourth team from the Americas RMR to qualify for the Major, leaving the event with a 3-1 record. Andrei "⁠arT⁠" Piovezan's team beat Infinity, O PLANO, and paiN in Stockholm, and barely missed out on the chance to fight for the only available Legends spot due to a narrow loss against Evil Geniuses.

arT discussed his entry role in the squad

The 26-year-old in-game leader sat down with HLTV following his qualification game to talk about FURIA's journey through the RMR, Rafael "⁠saffee⁠" Costa's performances, and his expectations for the Major.

Congratulations arT, you are going to your home Major in Rio, are you excited about that?

Yeah, a lot. It was our objective for this year and a must-do for us. Even if it's not a 3-0 in the Legends Stage, it's good enough for us to be guaranteed to attend the next Major in Brazil.

You mentioned not getting the 3-0 record, the game you dropped was against Evil Geniuses, but you almost pulled a comeback on the T side of Nuke before letting the game go. Tell me, what went wrong?

I think our CT side in that game was really bad, and that was the biggest thing. I think that we came back on the T side, it was not an amazing half, but overall it was good. On the defensive half, we lost control from the beginning with the loss in the first pistol round, I did a bad play with a pre-planned thing and it did not work. I always thought we could come back from 0-5, we tried our best, but in the end, we made mistakes after that which cost us too many rounds to be able to come back.

Regardless of the loss, saffee was really good on Nuke against EG, but there's no hiding that he has not reached the heights he showed with his old team paiN, tell me what's behind this?

AWPers when they join FURIA have a tough time adapting, just because we play a style too fast-paced for them to find their comfort. His spot, which has him playing too aggressively and holding passive angles is hard to play. We rotate a lot and the AWPer has a lot more responsibility, it's always tough, but it's something that comes with time and he's going to feel more comfortable and do his own plays and adapt to our style. It's a process.

Have you done anything to balance out the aggression and the role of the AWPer?

To be honest, sometimes it's the lack of aggression that hits us and makes us lose some rounds and some matches while sometimes it's too much of it in situations where we shouldn't. It's a mix between those, and not as clear as saying just "less aggressive is better," I think it's a misconception that we only play aggressive. If you watch our games you'd see that a lot of rounds are nowhere near close to that, it can be regular CS, slow-paced, and switches between aggressiveness in the early round and passive in the mid-round. There's a lot going on so it's just a matter of us recognizing what are our weaknesses.

FURIA were the first Brazilian team to qualify for the Major

After that match you came back against O PLANO and it was a fantastic match for almost everyone on the team. You had a really good CT side, what was the key to that strong half?

Yeah, I do think they had a plan for us, especially when I rewatched the matches. I saw that they were trying to hit B a lot in the first two gun rounds, in the first one we caught them off guard by pushing underpass and just breaking their strat while in the second I was AWPing in B. After these two rounds and the early game for them, they lost the pistol and the first two gun rounds trying to do a B pop with us breaking their strat, I think after that it was hard for them to come back. It was like 6-0 when they bought again and it's tough, we had two AWPs and [good] economy, a lot of confidence in a best-of-one for the Major and there was a pressure for them and for us. Obviously, there was less pressure on us because of the score, but it's just hard to come back after that.

If I can make the life of my teammates better... I do that.
Andrei "⁠arT⁠" Piovezan

You're not only the in-game leader, but you're also a playmaker for the team but your role as a spearhead has been sort of inconsistent in recent times, do you have any thoughts on why it sometimes it's not working for you?

I don't see myself as someone who is choosing to do the entry stuff, it's something that I think it's better for me to do than other players — I just try to put them in a situation that is favorable for them. If you watch the matches instead of just watching stats, if you have set attack and we need to entry so in that situation there is no "arT being arT" it's just that you are the regular entry and you're jumping around angles and it's just the mindset I have. If I can make the life of my teammates better, or if they have low HP and I need to peek an angle for them, I do that.

I play bad guns, I give them guns so I just try to create space for them to be more comfortable and play more stable CS as it's easier for them to trade me than the other way around, you know? It's match by match, of course, I make a lot of mistakes, I am human too, but we try to improve that as much as we can.

You mentioned earlier about missing the Legends Stage spot, does that change your expectations for the Major or your aims?

No, I am just happy that I made it through. We knew that it was going to be tough because of the format with the BO1s, it's something that bothers us and me personally, so we knew it was going to be hard and we'd have to win every match. Of course, we were expecting that [to qualify], it was expected not only by me but also by my teammates and the Brazilian fans. There was a lot of pressure to be 3-0, things did not work out, but I am happy with the 3-1. szia
true fans do not want their team to qualify as legends. can play more games when they are challenger and their major win will feel much more deserved
2022-10-07 19:52
3 replies
#16
based |

Skadushi
Him saying "I don't see myself as someone who is choosing to do the entry stuff, it's something that I think it's better for me to do than other players" automatically reminded me of Train on EPL vs Astralis, when he got an AK from yuurih (I think) and almost aced them after loosing the pistol to eliminate Astralis
2022-10-11 15:02
Login or register to add your comment to the discussion. 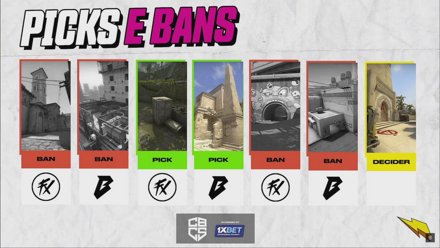