How will NAVI's six-man setup work in Abu Dhabi?

The BLAST Premier World Final will mark the first time we will see a team utilize a six-man roster on LAN. Natus Vincere and BLAST shared some insight into how this will work in practice.

Prior to the BLAST Premier Fall Final last week, Andrey "⁠B1ad3⁠" Gorodenskiy went on record confirming rumors that Natus Vincere are ready to experiment with a six-man roster again.

The coach said that the team is preparing to bring in academy player Andrii "⁠npl⁠" Kukharskyi for "some maps" at the BLAST Premier World Final to give him a chance to show his worth and to create competition for Viktor "⁠sdy⁠" Orudzhev, who now seems to be on thin ice after trialing for the team for the past six months.

After watching NAVI play during the Fall Final, npl is ready to step onto the server in Abu Dhabi

This is a process that NAVI have already employed before when they contemplated possible improvements to their roster. In late 2020, at the height of the COVID-induced online era, Valeriy "⁠b1t⁠" Vakhovskiy joined the team from the NAVI Junior roster to play select maps instead of Egor "⁠flamie⁠" Vasilyev before he permanently replaced the Russian a few months later. The difference now is that the Abu Dhabi tournament, which takes place on December 14-18, will mark the first time we will see a team utilize a six-man roster on LAN. This brings with it some question marks over how it will work in practice when Natus Vincere want to switch players in the middle of a series.

HLTV.org got in touch with NAVI and BLAST to ask about what this process will look like and to get some insight on how the tournament organizers will accommodate for the six-man setup.

NAVI COO Alexey "⁠xaoc⁠" Kucherov has reiterated that the plan outlined by B1ad3 is still indeed in place but left the exact details shrouded in mystery: "npl is going to play select maps instead of sdy, the same story as it was with flamie and b1t. How many maps and which ones, I can't say unfortunately at this stage. Let's surprise our enemies and see the results of his importance."

As far as mid-series player changes go, this has been allowed by BLAST ever since the likes of Natus Vincere and Astralis first experimented with the idea of extended lineups in online tournaments in 2020. The tournament organizer added a clause to its rulebook to outline the procedure that will be in place should a team wish to make changes between maps on LAN, as well as to make sure there are no delays on such occasions, which states:

6.8. Match substitutions: Teams may field a different lineup for each subsequent Map provided that they can set-up the Player in the Playing Area within the pre-scheduled break times. Line-ups for each Map must be submitted to the Tournament Operations Manager 10 minutes before the Map starts. If they cannot set up the substitute(s) in time, this may result in the substitute(s) playing on the starting Players' peripherals and/or settings. If a substitution is made:

6.8.1. The opposing Team will have two (2) minutes to confirm their lineup with the Tournament Operations manager; and
6.8.2. The substitution is final for that Map.

BLAST also further commented on what they are doing to accommodate for six-man rosters.

"We provide six player ready gaming setups in each practice room. This has been a staple for BLAST events for the past couple years. This has been used by NAVI on two occasions, once previously for headtr1ck and for npl in the recent Fall Finals," the tournament operator has told HLTV.org.

Their set up time will be the 15 minutes allocated between the maps, we will not provide any additional time
BLAST Tournament Ops

"The substitute will be required to do SSD set up with their team pre-tournament to ensure that they're ready, if they need to set up. Their set up time will be the 15 minutes allocated between the maps, we will not provide any additional time."

To summarize, let's say sdy plays the first map of a series and the map ends, and Natus Vincere want to bring in npl for the second map. They have the next five minutes to notify BLAST of the player change — at which point this change becomes irreversible for that map — and 15 minutes in total to switch the prepared hard drives and peripherals before the next map starts. uninformedAmerican
Would you mind sharing with me how you check them? Or is asking someone for the practice server IP along the same lines as asking a magician for his tricks? Hahaha
2022-12-05 18:34
27 replies
#28
Twistzz |

uninformedAmerican
"I don't want them getting ddossed" Yeah, this is what I assumed would be the case. That's why I was curious as to whether or not there was some sort of safe way to check the lobbies without compromising the IP. "so I can't but you can trust, I have no reason to lie" No worries my friend. I completely understand, and I also trust that you are telling the truth :) Thanks for the update about the situation, I appreciate it. Hopefully we can see another Grand Final between FaZe and NaVi to close out the year. Obviously NaVi have been in utter shambles lately, so there is a good chance that they stumble and don't even make it that far. But I am still of the belief that FaZe are the best team in the world at the moment in time, and I expect them to at the very least make it to the Finals (especially with stavn missing the event). Even if NaVi fall short to FaZe in the Finals once again, I still believe that a back and forth battle between the two for one last time would be the ideal way to finish out the 2022 season. Regardless, I wish you the best and hope you have a great week! Take care and be well my friend <3 -- Appreciative American
2022-12-05 18:42
25 replies
#37

uninformedAmerican
He has been free to leave this entire time, and he is still free to leave currently. Sdy has never been under contract with NaVi. -- Random American
2022-12-05 18:45
7 replies
#33
ton |

uninformedAmerican
Without a doubt. As a NaVi fan, I have never been in favor of the roster move ever since the beginning. That being said, I admire how Sdy has handled the situation, and I have nothing against him as a person. I truly wish the best for him and hope that he gets another opportunity on a quality team that is looking for a support player, because I think he has the potential to play a role on a trophy contender going forward. The entire situation has just been a disaster overall, however I am happy that he was able to lift a trophy when it is all said and done :) -- Average American
2022-12-05 18:52
5 replies
#36
ton |

uninformedAmerican
Absolutely. It's a shame how many people on these forums act as if the war only impacted their lives for a month or so and then everything went back to normal. That is anything but the case. My heart goes out to all of the players along with their friends and families who have been going through living hell ever since February. We can only pray that those who hold the highest power throughout the world come to their sense one day, and I firmly believe that it starts with the United States. Our actions are unexplainable, despicable, and need to be stopped. But that is a conversation for another day. Take care my friend <3 -- Honest American
2022-12-05 21:27
1 reply
#62

VelgenBelgenberg
It wont, it wont work, thats how most teams who play with 6 ppl end up with internal fighting, as playing with 6 ppl shows a clear lack of "something", the whole "yeah we're gonna hire someone else but nobody is losing their job yet" has NEVER worked out
2022-12-05 19:15
5 replies
#104

Dreamz66
I think they had a pretty good year after B1t replaced flamie eventually. They are back to different players, because they had to kick Boombl4 not because it didnt work.
2022-12-07 10:47
#112
JACKZ |

reyno0o
Actually the 6 man lineup idea was showing a lot of promise with Navi and Vitality and more teams were ready to jump on until Valve blocked it for majors
2022-12-06 14:51
#41

WarLok085
Ridiculous. Sdy absolutely played well enough during the Major. He has crap roles and often gets pinched 2v1 when his teammates die. His aim mechanics arent spectacular but above average forsure
2022-12-05 20:42
#53
KALbI4 |

GluckFM
Its not going to work in the long run, but the whole point of Navi doing it is to ease the academy player in, focusing only on some maps. Sdy is going to get cut, while nipl is either going to show some promise and get his place as a permanent 5th or be back to academy roster in favour of a new pick-up.
2022-12-06 17:07
1 reply
#131
syrsoN |

CYKAwa!!!!!
What's all the fuss with the storage about in all seriousness? Switching accounts, changing periphery if needed, and adjusting the setup with an easy copy + paste for the cfg should take care of everything, shouldn't it?
2022-12-05 21:35
#64

KarLybop
Such a pointless situation. Recruit an IGL and let S1mple, Electronic and b1t just carry Navi to victory every event. They are a better front trio than any other team in the world.
2022-12-06 11:08
1 reply
#114
sergej |

Dai_Bach
They may need a couple more on it just to really spread out S1mple's toxicity obviously perfecto is still going to be the main punch bag for the billy GOAT but you know sometimes you just need to attack someone else, maybe get a German on the team we know he doesn't like them very much maybe get Farlig on there somewhere.
2022-12-06 12:28
#116
huNter- | 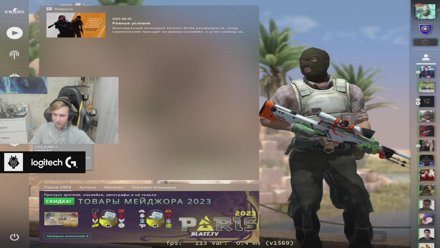